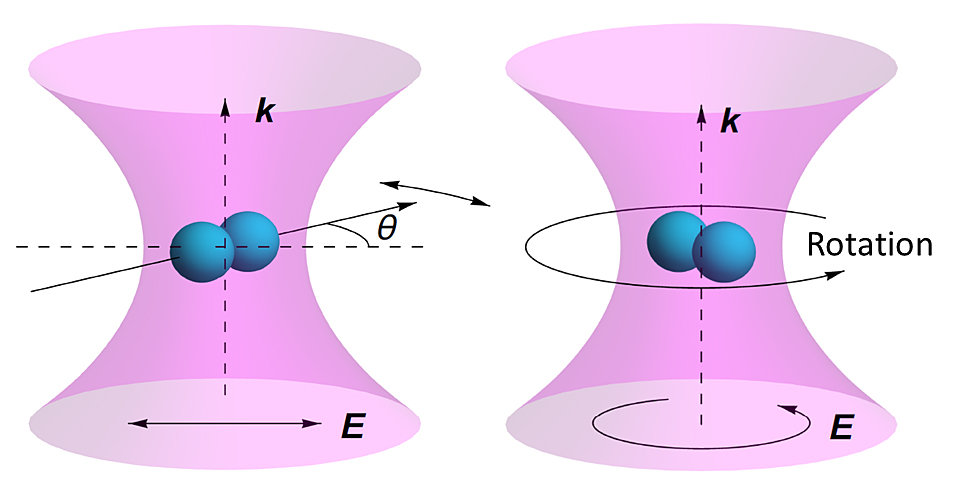 Researchers have created the fastest man-made rotor in the world, which Tongcang Li, an assistant professor of physics and astronomy, and electrical and computer engineering, at Purdue University believes will help them study quantum mechanics. At more than 60 billion revolutions per minute, this machine is more than 100,000 times faster than a high-speed dental drill. Li’s team synthesized a tiny dumbbell, oblong-shaped nanodiamond that is levitated by a laser beam in a vacuum chamber. The nanodiamond is about 100 nanometers in diameter or roughly the size of a virus. The laser can work in a straight line or in a circle – when it’s linear, the dumbbell vibrates, and when it’s circular, the dumbbell spins. Now they can study the extreme conditions different materials can survive through and, in principle, they can detect the torque on a single electron or a single proton.

A spinning dumbbell functions as a rotor, and a vibrating dumbbell functions like an instrument for measuring tiny forces and torques, known as a torsion balance. This is the first experimental observation of the torsional motion of a nanoparticle levitated in a vacuum and represents a very sensitive torque detector. The paper details the detection of torsional vibration, a proposal to use the technique for torque sensing and also to achieve torsional "ground state cooling," which could aid efforts to study quantum theory and realize potential applications in quantum information processing and high-precision measurement for sensors. This cooling reduces "noise" caused by vibrating molecules and atoms, making it possible to precisely measure torque and probe the relationships between motion and electron "spin." Electrons can be thought of as having two distinct spin states, "up" or "down," and this phenomenon might be used in future quantum simulations. Watch a video to see how it happens here.

These devices were used to discover things like the gravitational constant and density of Earth, but Li hopes that as they become more advanced, they’ll be able to study things like quantum mechanics and the properties of a vacuum. “People say that there is nothing in vacuum, but in physics, we know it’s not really empty,” Li said. “There are a lot of virtual particles which may stay for a short time and then disappear. We want to figure out what’s really going on there, and that’s why we want to make the most sensitive torsion balance.”

By observing this tiny dumbbell spin faster than anything before it, Li’s team may also be able to learn things about vacuum friction and gravity. Understanding these mechanisms is an essential goal for the modern generation of physics, Li said.