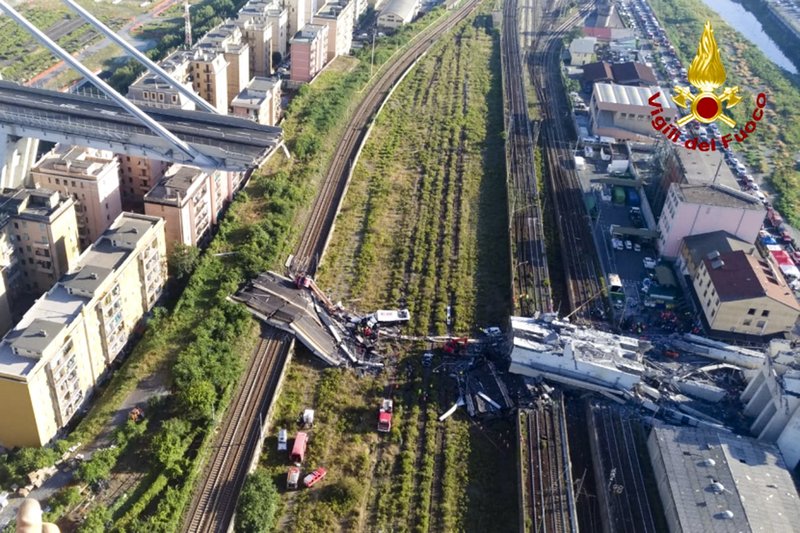 In 1967 a bridge designed by civil engineer Riccardo Morani was put into service in Genoa, Italy. This elegant bridge spanned a river, railroad tracks and other portions of the city with three tall pylons, each of which had concrete stays and were suspended 145ft above the ground. This glorious bridge appealed to those looking to add beauty to the skyline at the risk of using materials that are known to require more than average maintenance. The bridge was constructed mainly of concrete which has almost no strength in tension and is reinforced typically with steel “rebars”. Over time, corrosion attacks these tension members requiring frequent maintenance. As one victim stated to the media, “In Italy, we prefer ribbon cutting to maintenance”.

On Tuesday, August 14, there was an intense rainstorm and one of the tower-supported sections collapsed, causing the deaths of 43 people. In addition to those losses, injuries and property damage will total in the millions. Forty-three people lost their lives because of this accident. This is Italy's fifth bridge collapse in just five years.

The work of clearing the rubble must be done carefully and meticulously. The problem of investigating prestressed concrete bridges is that concrete is a much more complex material than steel. Unlike steel, which is fabricated under carefully controlled conditions in a steel mill, concrete is usually made and formed on site which can lead to variable strengths and properties.

It is clear that infrastructure maintenance across the world needs to be dealt with and handled properly. Let’s not wait for another tragedy like the Morani bridge collapse before we take the initiative to make sure our bridges are designed well from the start and maintained well enough to keep them standing for many decades.