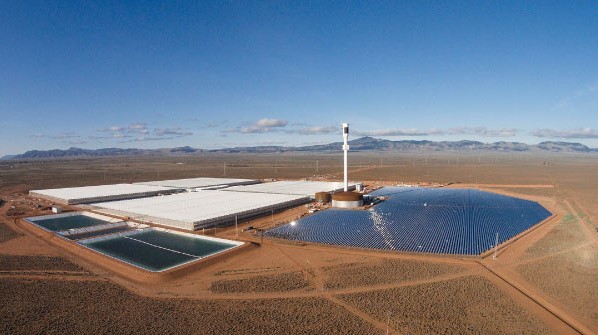 A state-of-the-art tomato farm has begun operations in Port Augusta, Australia. What makes this farm unique is that it runs completely on seawater and solar power. There are tomatoes growing in the desert! Thanks to the efforts of Sundrop Farms Holdings LTD 37,000 lbs of tomatoes will be on shelves every year. This is paramount since traditional agriculture is wasteful in terms of water and fossil fuels. Instead of soil, pesticides, fossil fuels, and groundwater, Sundrop Farms uses only Solar Power and desalinated seawater on its 49-acre farm.

The increase in population has influenced scientists, researchers, government officials and many other professionals to address food, water, and energy shortages. In this pilot facility, water is pumped from the Spencer Gulf 1.2 miles and then desalinated with solar power. The farm's solar power is generated by 23,000 mirrors that reflect sunlight towards a 377ft high receiving tower. 118 million gallons of fresh water each year, will be created. That’s 180 Olympic sized swimming pools. This process makes it the optimal environment to grow tomatoes. Seawater-soaked cardboard keeps the plants cool and solar heat keeps the greenhouse warm in winter months. The seawater sterilizes the air and plants are grown in coconut husks allowing them to thrive without pesticides.

Extreme weather events make it difficult to consistently provide consumers with products each year. Agriculture in different areas is devastated by weather. One solution to this problem was put to the test last week during a once-in-50-year storm that wreaked havoc in South Australia. Sundrop Farms was able to take the brunt of high winds and continue operations despite a massive blackout that crippled many industries in the areas making them inoperable. While other companies suffered massive setbacks Sundrop Farms is "living proof" that its groundbreaking technology could work on a large scale.

Other solar/seawater farms are being developed from the U.S. to Portugal and Africa. Each company and facility will be fulfilling local needs as well as sculpting the agriculture of tomorrow.
https://www.ecowatch.com/sundrop-farms-solar-desalination-2033987160.html