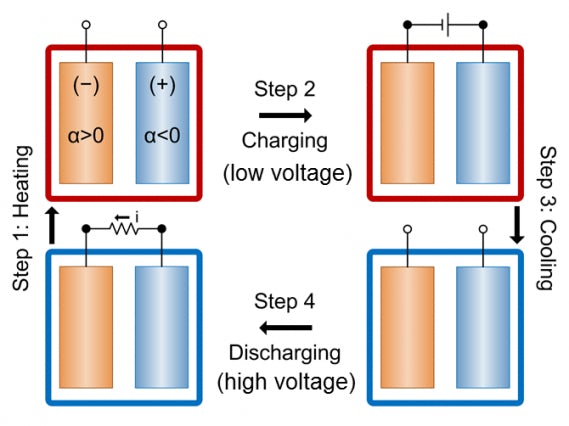 The discovery of fire was a turning point in human history, it offered portable warmth, light, protection, and a new way of preparing food. It was also one of mankind’s most successful attempts to harness energy. Because energy is almost always lost in the harvesting phase, researchers around the world have spent decades seeking ways to harness this wasted energy.

Researchers at MIT and Stanford have found a new way to transform waste heat into electricity. Electricity is considered high-grade energy because it can be converted into other forms of energy for use and storage without significant losses. Thermal energy is low-grade energy, which means that attempts to transform heat back into other forms of energy is costly and inefficient. Most of the time, thermal energy is written off as waste heat and released into the environment. Converting low-grade energy back into high-grade energy is an uphill battle, but there are new thermoelectric products that could be our best bet. Efficient and low-cost thermal energy-harvesting systems are needed to utilize the tremendous low-grade heat sources.

The new technology uses available materials and could be used to recycle the large amounts of wasted heat generated in industrial processes and electric power plants. The new system allows waste heat to raise the temperature of a battery, and thanks to the thermogalvanic effect, the battery can now be charged at a lower voltage than would normally be required. The battery is then cooled down, and because the charging voltage is lower at high temperatures than at low temperatures, once it has cooled the battery can deliver more electricity than what was used to charge it. That extra energy, of course, does not just appear from nowhere: it comes from the heat that was added to the system.

Imagine the potential of thermoelectric-powered devices, Engineers are working diligently to find the most cost-effective approach and I don’t know about you but just the possibility of charging a cell phone by using body heat is something to look forward to!

« The Plastic StrategyCreating a New Generation of Solar Cells »