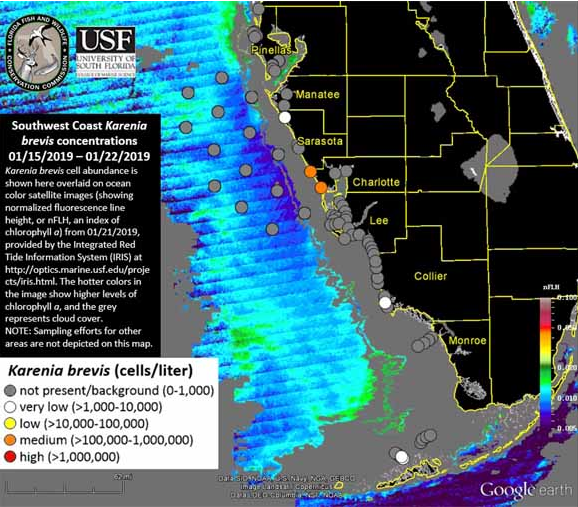 Map of Red Tide Collections as of January 23, 2019. Provided by the University of South Florida

Now, politicians and engineers are scrambling to address a problem that has already gotten out of hand. In August 2018, Florida Governor Rick Scott issued a state of emergency after dead marine life washed up on 170 beach points because of the red algae outbreak. Millions of dollars in funding have been allocated to the research and mitigation of this pollution.

The red tide comes from the Karenia brevis algae, a toxic, unicellular organism that discolors salt water and kills fish, birds, and mammals like manatees and dolphins. Engineers and scientists believe the tide can only exist in salt water, develops offshore, and can be fueled by nutrient pollution.

The Florida Wildlife and Conservation Commission has documented red tide outbreaks that last between a few weeks to longer than a year. Nutrient availability, salinity, sunshine, and wind all affect the lifespan of the algae.

Controlling the outbreaks is no easy task. In the 1950s, U.S. Fish and Wildlife Service and State of Florida scientists used copper sulfate to try to get rid of the algae. The Florida Wildlife and Conservation Commission stated that “Although the copper sulfate killed some of the red tide cells, it led to the release of toxins that … had negative effects on other marine organisms.”

DO YOU NEED ENGINEERING PDH, CPC, or CPD?