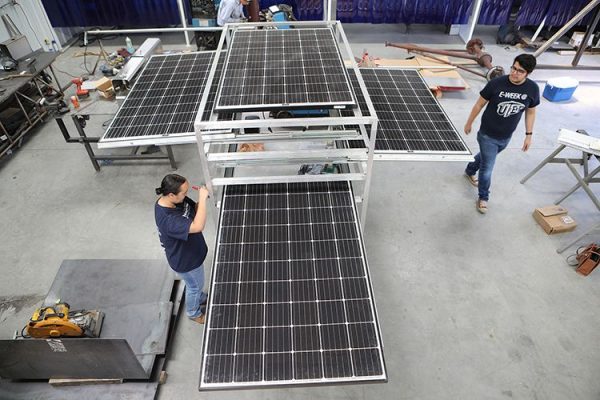 The end of September marks two years since Hurricane Maria made landfall in Puerto Rico. Even 24 months later, the island is still rebuilding and struggling with basic issues like electricity.

That inspired a Texas engineering professor to build something that could help. Dr. Ivonne Santiago of the University of Texas El Paso and her students constructed a portable charging station for those still without power.

The station is powered by solar panels which run batteries and create up to 1,500 watts of power. There are four AC outlets, plus USB ports and an operable refrigerator. The latter added to help store temperature-sensitive medicines like insulin, which must be kept around 45 degrees Fahrenheit at all times.

“The idea is we want to provide a power source to areas in Puerto Rico that still struggle without electricity,” Santiago said in a release published on the university’s website. “This is a lightweight, sustainable option that can serve those areas and provide power to people who need it.”

Dr. Santiago and her students visited Puerto Rico in 2018 and were devastated to see the damage, much of which still needs to be cleaned up.

Puerto Rico is especially vulnerable to storms because of its aging electrical infrastructure and staff and budget cuts to its power authority, the Puerto Rico Electric Power Authority. That’s why many parts of the island still struggle with access to reliable electricity, even today.

Dr. Santiago hopes her technology can be helpful. If her self-proclaimed “portable charging oasis” works well, she hopes to create more models that could be dispatched to other areas in the middle of an emergency.