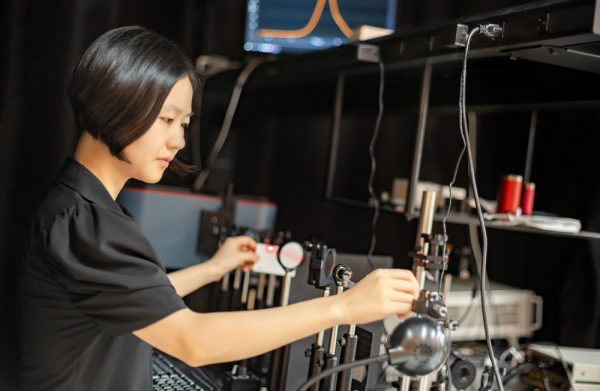 Photo Above: Dr. Qing Gu, assistant professor of electrical and computer engineering in the Erik Jonsson School of Engineering and Computer Science, calibrates equipment that helps characterize the emission wavelength of a laser and how much power the light emits.

Light is the fastest thing in the universe, and now an engineering researcher is trying to harness that speed to power faster data transport.

Dr. Qing Gu at the University of Texas Dallas is working on building a nano LED light source that could be integrated into microchips to power data transport on the chips themselves. She believes light could be used to mediate data transfer between parts of a microchip, instead of electricity. Dr. Gu has previously worked on nano lasers that can do the same thing but believes her nano LEDs could be more efficient. By increasing internal speeds on microchips, internet as a whole could become even faster. With the increase in cloud technologies and online gaming, those speeds are demanded and required more and more.

“In order to get faster internet, we need to increase the speed of data communication on the chip,” Gu said in a University of Texas press release.

Her research and designs mirror that of an optical fiber, which relies on light to move data between devices. She is funded by a prestigious military program from the Department of Defense’s Army Research Office. They gave her $356,000 over three years to help develop the technology they believe could be used for more efficient, low-energy data communication systems.