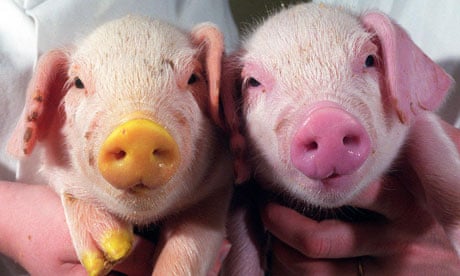 The genetically modified piglet glows in the dark as the result of jellyfish genes introduced into its cells at the University of Missouri. Photograph: Rex Features

The genetic engineering of animals is becoming more common in the scientific world. Researchers are genetically manipulating organisms for a variety of reasons, including medical, nutritional, aesthetic and economic purposes.

In agriculture, engineering can produce more productive livestock, reduce resistance to disease and create healthier meat products. In medicine, scientists are exploring the use of animals to grow transplant organs for human use. In the food industry, there are even some companies trying to grow their own meat products, like chicken nuggets, so there is less of a reliance on factory farms that use so many resources.

The frequency of these pursuits has renewed questions about ethics and animal welfare.

PETA strongly opposes any company or lab that relies on or manipulates animals for their experiments. They say 99% of all animals in laboratories are exempted from minimal protections in the federal Animal Welfare Act. On their website, they point to oversight, ethical, logistical, and welfare issues associated with the genetic engineering of animals .

In a study from the Pew Research Center, data shows Americans have mixed feelings about the genetic engineering of animals. Many see genetic engineering as more favorable when the purpose is to benefit human health. For example, 70% of Americans say they think it is appropriate to genetically engineer mosquitoes in order to prevent illnesses like Ebola.

Other respondents cite concerns about upsetting nature’s balance and the morality of the research. For example, 77% of survey takers say it is inappropriate to genetically engineer aquarium fish to cause them to glow.

Back in 2003, a company began inserting fluorescent proteins into pet fish and marketed them as GloFish. GloFish became very popular with buyers but initiated serious questions about the ethics and morality of the practice. California was the only state to ban their sale. Engineered Pets are becoming more and more popular and some research is being done to explore the cloning of deceased pets.

As animal genetic engineering continues to grow, questions about morality and ethics likely will as well.